An international consortium, led by IRB Barcelona and the biotechnology company Merus, reveals the preclinical data that has led to the discovery of MCLA-158 and its mechanism of action. Published in Nature Cancer.

Scientists from an international consortium led by Eduard Batlle, head of the Colorectal Cancer laboratory at IRB Barcelona, ICREA researcher and group leader of CIBER de Cáncer (CIBERONC), together with the Dutch company Merus N.V., reveal the preclinical data that has led to the discovery of MCLA-158 and its mechanism of action on cancer stem cells. Named Petosemtamab, the antibody MCLA-158 prevents the onset of metastasis (that is, the spread of cancer to other vital organs) and slows the growth of primary tumours in experimental models of cancer.

Published today in Nature Cancer, the study also lays the groundwork for the use of organoids in the drug discovery process undertaken by pharmaceutical companies. Organoids are patient-derived samples that can be grown in the laboratory, and they reproduce certain aspects of the tumour compartment. Until now, their usefulness was being explored in personalised cancer medicine—meaning their value in helping physicians make decisions about the best treatment for each patient. However, for the selection of MCLA-158, a biobank of organoids from cancer patients was used for the first time to discriminate which new antibody, among hundreds, was most effective and believed to be most suitable for the majority of patients.

“It is highly satisfying to see that our discoveries are helping patients. We started studying cancer stem cells 15 years ago. The journey to this point has been exciting but also very complex, and it has required a large investment of resources, as well as a great deal of work by many researchers. This study and the collaboration with Merus. N.V. reflects IRB Barcelona's focus: “The medicine of the future starts here,” says Dr. Batlle.

Antibodies are proteins that are naturally produced by our bodies to recognise infectious agents or altered cells so that these can be removed by the lymphocytes of the immune system (white blood cells). The antibody described in this work, Petosemtamab (“Peto”, MCLA-158: LGR5 x EGFR Biclonics®), is a bi-specific antibody that recognises two proteins, namely EGFR and LGR5, on the surface of cancer stem cells.

EGFR activity promotes uncontrolled cell growth, while LGR5 marks the surface of cancer stem cells, which are responsible for tumour expansion. Dr. Batlle's laboratory is recognised worldwide for its work on the identification and characterisation of colorectal cancer stem cells, and it has led work not only on the development of MCLA-158/ Petosemtamab but also on the characterisation of its mechanism of action.

In short, MCLA-158/ Petosemtamab degrades the EGFR protein in cancer stem cells that have the LGR5 marker, thereby blocking the growth and survival pathways in the cells that initiate and spread cancer. However, this antibody does not interfere with the functioning of healthy stem cells, which are essential for the proper functioning of tissues.

The MCLA-158 antibody is a potent inhibitor of colorectal cancer organoid growth and it blocks the initiation of metastasis, as well as growth in several preclinical models of cancer, including tumours of the head and neck, oesophagus, and stomach.

An organoid biobank for drug discovery

For the development and characterisation of this antibody, researchers from HUB Organoids built a large biobank comprising organoids derived from patients with colon cancer, organoids from colon cancer metastasis to the liver, and organoids from normal non-cancerous tissue.  Scientists from OcellO B.V. (Crown Bioscience) performed high content screening with the organoids.

The use of organoids in the early stages of drug development—in this case, therapeutic antibodies—facilitates the identification of those that are effective for most patients or even against tumours carrying a specific mutation. Using organoids from healthy tissue, an additional advantage is the possibility to identify unwanted side effects of the drugs on organs. This approach has allowed the researchers to assess the harmful effects of the drug on healthy cells and thus withdraw antibodies with greater toxicity in the earliest stages of the study.

In the coming months, the company Merus N. V. plans to publish new data on the clinical trials underway with Petosemtamab. “We are hopeful that the anti-tumour activity reported in the preliminary data will be confirmed,” says Dr. Batlle.

This preclinical research published today in Nature Cancer includes work carried out within the framework of the suppresSTEM consortium, funded by the EU and involving collaborative work by various international research institutions—IRB Barcelona, the Hubrecht Institute and the Sanger Institute—and companies, namely Merus N. V. and OcellO B.V./Crown Bioscience. The Vall d'Hebron Institute of Oncology (VHIO), the Catalan Institute of Oncology (acronym ICO in Catalan) and the company Xenopat also collaborated in data for this publication. 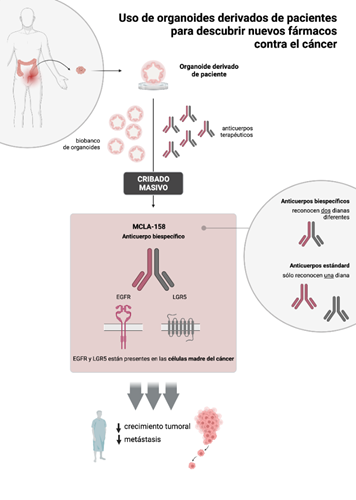